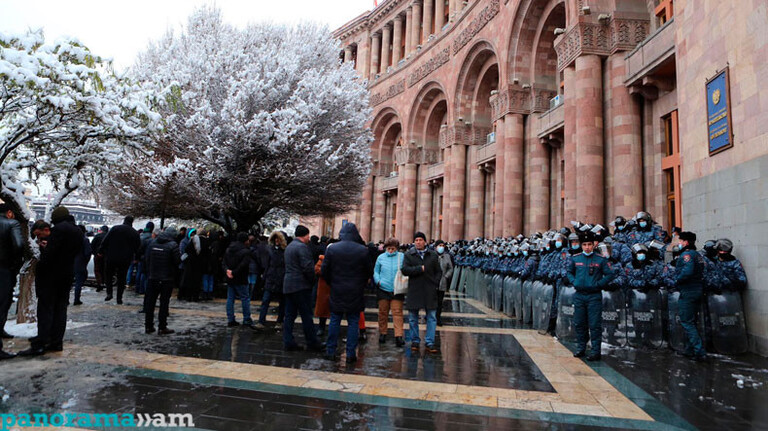 Armenian PM Nikol Pashinyan said at a weekly cabinet meeting that new border checkpoints are being mapped out in the country’s southern Syunik region that borders Azerbaijan to ensure security, Hetq.am reports. Pashinyan added that there are borderline issues related to two villages in the region that can lead to painful outcomes for the residents. Pashinyan assured that the residents will receive full compensation in case their interests will be compromised.

The situation in Syunik started escalating recently after the Armenian Defense Ministry was reported to order handing over the Armenian advantageous positions to Azerbaijan dangerously exposing Armenian border communities to the Azerbaijani forces due to their close distance.  Later the Minister of Defence announced that the security of Armenian southeastern borders will be guaranteed by Russian troops. Protests started in Syunik where the residents blocked the highway and prevented PM Pashinyan from entering the region.

Hundreds of protesters gathered outside the government building trying to disrupt the weekly cabinet meeting. While the cabinet meeting was in progress, protesters outside the government chanted "Nikol, you are traitor!" "Armenia without Nikol", Panorama.am reports. 69 citizens have been detained by police, Armenpress.am writes. Citizens have also blocked one of the main avenues in the capital demanding Prime Minister Nikol Pashinyan to resign.

Vazgen Manukyan, the oppositional candidate for the Prime Minister’s post called on to participate in the rally. He said that people rose up two years ago hoping to have a better life, now they are ashamed to go to the streets. The “Homeland Salvation Movement”, a coalition of 17 parties nominated Vazgen Sargsyan for Prime Minister of an interim government. The Movement demands current Prime Minister Pashinyan to resign over what they call was a mishandling of the recent six-week war in Nagorno-Karabakh unleashed by Azerbaijan. Moscow-brokered peace truce ended with thousands of human deaths as well as large territorial and cultural heritage losses for Armenia.

Demands for Pashinsyan’s resignation have been supported by Armenia’s President Armen Sargsyan, the Armenian Church, distinguished public figures, and academia representatives in Armenia and the Diaspora.

Prime Minister Pashinyan recently announced that he has no intention to resign.