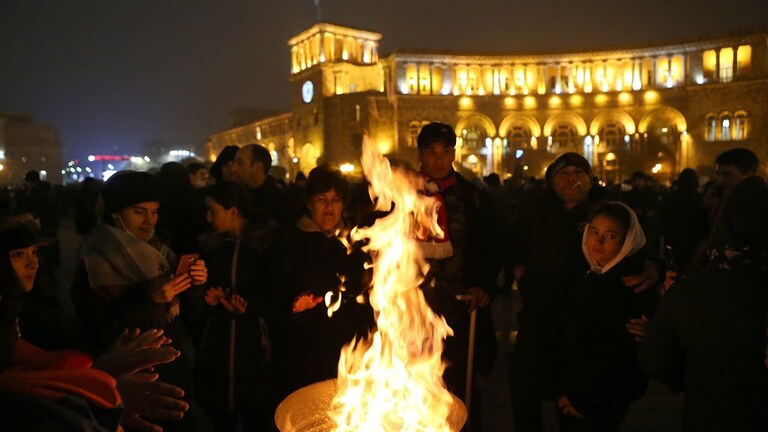 Leaders of a coalition of 17 parties said they will hold daily demonstrations until Pashinian agrees to hand over power to an interim government tasked with holding snap parliamentary elections within a year, RFL/RL Armenia reports. Anti-Pashinyan protest leaders, joined under Homeland Salvation Movement, nominated Vazgen Manukyan as an interim Prime Minister.

Following a call to start a national strike, the protesters surrounded the buildings of the government and prosecution bodies. “We must take the entire state system from Nikol Pashinyan,” Ishkhan Saghatelyan, one of the leading figures of the movement, told the protesters, Armenpress reports. “We give My Step [parliamentary group led by Pashinyan, ed.] time till 6:00 p.m. to appear to the leadership of the Homeland Salvation Movement to discuss the situation in the country. We are a parliamentary state, and the issue must be resolved in the parliament,” Saghatelyan said.

Later the Movement announced that they temporarily suspend the blockade of the buildings today to resume the rally in the main square. Meanwhile, despite the efforts of the Police, citizens put up tents in Republic Square, informing that they would stay there until Prime Minister Pashinyan’s resignation.

Pashinyan Has No Intention to Resign. Attorneys Submitted Crime Report Against Prime Minister

“The real confrontation is not between the government and opposition but between the ‘elites’ who lost their privileges in 2018 [after the Revolution, ed.] and the people,” said Pashinyan during his Facebook address today. He confirmed his intentions to stay in power and perform his functions of Armenian Prime Minister.

Earlier today the President of the Chamber of Attorneys Ara Zohrabyan, jointly with other attorneys, submitted a crime report to the Prosecutor General’s Office accusing the prime minister of mishandling the war with elements of treason in his actions, Hetq.am reports.  They also called on the parliament to lift the martial law in the country to allow for a no-confidence motion.

“On December 21, the ECtHR granted the request submitted by the Republic of Armenia, requesting Azerbaijan to provide information on 53 prisoners of war, their medical documents, and information on the terms of their exchange by 28 December.

Earlier, on 18 December, another request was submitted by the Government of the Republic of Armenia on behalf of 62 servicemen captured in Khtsaberd [Nagorno Karabakh] (the attorneys had already submitted an interim measure request for 9 servicemen out of 63),” said Yeghishe Kirakosyan, RA Representative to the ECtHR.

UNESCO announced today that “Only the response of Azerbaijan is still awaited for UNESCO to proceed with the sending of a mission to the field. The authorities of Azerbaijan have been approached several times without success so far,” Armenpress reports.

“Every passing week makes the assessment of the situation concerning cultural property more difficult, not least due to the weather which is expected to become harsher in the coming weeks. The window of opportunity that was opened by the ceasefire must not be closed again. The safeguarding of heritage is an important condition for the establishment of lasting peace. We are therefore expecting Baku to respond without delay so that the constructive discussions held over recent weeks can be turned into action,” Ernesto Ottone, Assistant UNESCO Director-General for Cultural, said in the statement.

Rapid Respond Mechanism funded by the European Union, will provide help to people displaced from Nagorno Karabakh, EU Delegation in Armenia announced today. Within the next six months, basic hygiene items will be provided to the families in the Shirak region. The project will also provide education assistance to 220 children, and 280 children will gain access to psychosocial and psychological support.

The General Prosecutor's Office reports that the investigation did not confirm the statement by the former Chief of the General Staff of the Armenian Armed Forces Movses Hakobyan that on the third day of the war in Nagorno Karabakh, Prime Minister Nikol Pashinyan stopped mobilization, Arminfo reports. At a press conference held after the Moscow-brokered peace deal in November, Hakobyan accused Prime Minister Pashinyan and the Defence Ministry of mishandling the appointments of the military leadership and mobilization of forces during the war.

Arush Arushanyan, Mayor of Goris, who was arrested yesterday after calling on protesters to prevent Prime Minister Nikol Pashinyan’s entering the southern Syunik region, will be released. According to the court’s decision, Arushanyan’s arrest was unlawful. Later today Arushanyan was accused of abuse of official power, organizing illegal business, violating the rules of subsoil protection and use, Armenpress reports. Last week, the residents blocked the Goris-Kapan highway in the Syunik region following the news that the Armenian Ministry of Defence ordered the serviceman to leave the advantageous Armenian positions dangerously exposing Armenian border communities to the Azerbaijani forces due to their close distance.