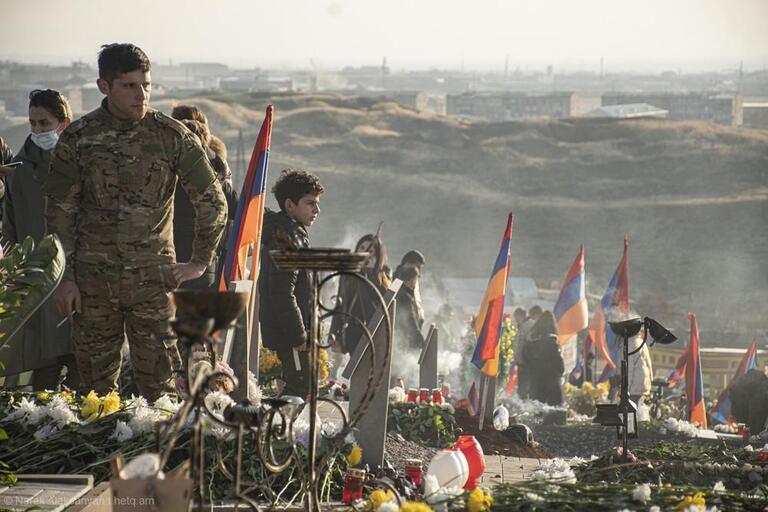 The Human Rights Defenders in Armenia and Artsakh published an ad hoc report about indiscriminate targeting of journalists covering hostilities in Nagorno Karabakh. Heavy injuries were caused to the journalists (5 foreigners and 2 Armenians), and one person, accompanying them, was killed.

“The journalists wore a special uniform and distinctive [Press] signs. Moreover, the journalists were targeted when they were carrying out their professional activities in civilian settlements, and not in the hotspots of hostilities,” the report says. The Azerbaijani authorities have also filed a criminal case against the journalists who worked in Nagorno Karabakh.

Clashed broke out between the police and Nikol Pashinyan’s opponents

Three days of national mourning began today in Armenia with a march to commemorate war victims in Nagorno Karabakh. Prime Minister Pashinyan, who led the memorial procession surrounded by a large number of police, created tension in Yereblur Military Memorial. Citizens demanding Pashinyan’s resignation tried to prevent him from entering the pantheon and threw things on him shouting “Nikol is a traitor!” followed by clashes involving the police.

Another separate commemorative procession organized by the “Homeland Salvation Movement” moved to St. Gregory the Illuminator Church where a mass was served to honour the victims of the Artsakh war. The Movement is a coalition of more than a dozen parties that have been demonstrating against the government since the Nagorno-Karabakh ceasefire of November 10. Earlier this month, the President also met with Vazgen Manukyan, the joint candidate for interim Prime Minister nominated by the Movement.  The Movement called on a national strike from 22 December.

The six-week Nagorno-Karabakh war with Azerbaijan ended with a ceasefire statement brokered by Russia. The opposition accuses the Prime Minister of inability to handle the conflict which caused thousands of deaths and the conditions of the peace deal with Azerbaijan.

“We are creating a new security guarantee for Syunik,” says Armenian PM

In his address to the nation today Armenian Prime Minister Nikol Pashinyan stated that the decision on the power in Armenia should be decided by the people in Armenia and not the elite circles.

Pashinyan said that the border in Syunik Province has not been changed. “I wish to reiterate that not a single millimeter of land has so far been surrendered in Syunik region, just as not a single millimeter of land has been surrendered from the entire territory of the Republic of Armenia,” said Pashinyan. Speaking about the Russian border troops to be deployed in Syunik, Pashinyan added that Armenia is “creating a new security guarantee for Syunik, since today’s border configuration stems from the security system of which we are part and where completely different security rules are being applied”. The residents of Syunik Province blocked the Goris-Kapan highway demanding security guarantees from the government. Yesterday, the municipality of Kapan reported that the Armenian Ministry of Defence ordered the serviceman to leave the advantageous positions in Kapan.

Pashinyan also addressed the issue of new war prisoners in Hadrut Province, which he described as “incompatible with the logic of the truce” between Armenia and Azerbaijan.