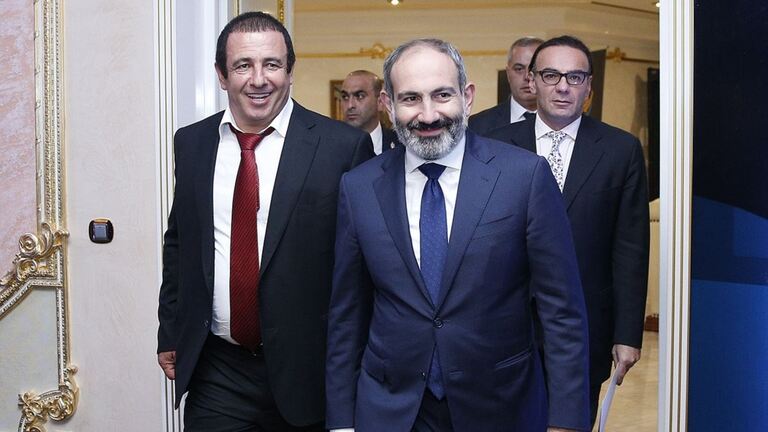 PM Nikol Pashinyan and leader of “Prosperous Armenia” opposition party Gagik Tsarukyan held a short meeting. According to Tsarukyan, during the meeting, he reaffirmed his previous public statements about the need for PM’s resignation as the only way to overcome the situation in Armenia.

“Prosperous Armenia” is the second largest group in the Armenian Parliament. They have joined “Homeland Salvation Movement”, the coalition of more than a dozen opposition parties, demanding Pashinyan’s resignation over the recent Nagorno-Karabakh war. The “Homeland Salvation Movement” continues protests against Pashinyan refusing to have a dialogue with PM after Pashinyan invited political forces to discuss the possibility of snap parliamentary elections.

Another meeting was held with ''Bright Armenia'' Party leader Edmon Marukyan, who presented his position to PM Pashinyan today, Armenpress.am reports. ''We suggested that the PM should resign, the parliament should elect a new Prime Minister, an interim Government should be established from the forces that have a consensus over that candidate and individuals that have made achievements in their spheres should be included in the Government,” Marukyan said.

Demands over Pashinyan’s resignation have been supported by the Armenian President, the Catholicos, representatives of academia and cultural elites in Armenia and Diaspora. According to Armenian President Armen Sargsyan, the solution he offers is simple: the government should resign to spark hope in people in Armenia. “It is difficult to stay in power when you lost [the war],” Sargsyan said in his statement on December 29.

Delegations from Iran and Armenia discussed plans for the extension of a natural gas-electricity barter agreement between the two neighbors on Sunday, Tasnim News Agency reports.

For his part, the head of the Armenian delegation Hakob Vardanyan said his country had been discussing gas exports and the extension of a gas barter deal with Iran for one and a half years, describing his talks with the Iranian delegation as very constructive.

Back in 2004, Tehran and Yerevan signed a natural gas and electricity barter agreement under which Iran’s exported gas would be used as fuel for power stations in Armenia and, in return, Iran would import electricity from Armenia. Armenia began importing natural gas from Iran in mid-2009.

Armenian Human Rights Defender Arman Tatoyan condemned the Azerbaijani military for “terrorising” the peaceful residents of Armenia by installing a “Welcome to Azerbaijan” sign in between border settlements in Armenia’s southeastern Syunik region, where delimitation and demarcation works are still ongoing, Armenpress.am reports.

The sign, featuring a distorted map showing large parts of Syunik as part of Azerbaijan, and flags of Azerbaijan were installed by the Azeri troops on the road leading from the town of Goris to the village of Vorotan.

“The sign was installed on a road linking an Armenian civilian settlement with another one,” Tatoyan said in a statement, adding that the Azeri troops installed the sign to explicitly terrorize and transgress the rights of the peaceful Armenian residents of the border towns “taking into consideration the tortures, inhumane treatment and other war crimes and ethnic cleansings that the Azerbaijani military committed against our people especially during and after the September-November 2020 war,” Tatoyan added.

A number of Armenian cultural and spiritual monuments of special importance have come under the Azerbaijani control as a result of the recent war unleashed by Azerbaijan against Artsakh.

Azerbaijan banned the entry of UNESCO international observers from Russia, France, the United States and Italy to the territories currently under the control of Azerbaijan, Armenian deputy minister of education, science, culture and sports Narine Khachaturyan told Armenpress.am. She stated that Azerbaijan in general doesn’t explain its action.

“It was expected in December that UNESCO should have sent a commission of international observers to the territories of Artsakh which currently are under the control of Azerbaijan”. The commission must have carried out a monitoring of several Armenian monuments. The delegates were from Russia, France, the United States and Italy, however, Azerbaijan banned their entry to these territories”, the deputy minister said.

Russian President Vladimir Putin has sent a congratulatory message to Armenian PM Nikol Pahsinyan on the upcoming holidays, Armenpress.am informs. “I am confident that the further development of the multidimensional Armenian-Russian relations is in line with the fundamental interests of our fraternal peoples, and is meant for ensuring peace, security and stability in the Transcaucasian region,” the message reads.

In her New Year’s message head of the EU Delegation in Armenia, Ambassador Andrea Wiktorin expressed her “sorrow and compassion for those who have lost their loved ones” during the recent Nagorno Karabah war. “And it is difficult for me to say this, but we know that hardship is not over yet. Today there are 90 000 displaced people in Armenia, who will not have a chance to spend the holidays in their homes,” the Ambassador said. Ambassador Wiktorin assured that the Delegation is “putting every possible effort to support Armenia in this difficult situation”.

Armenian Defence Minister Vagharshak Harutyunyan visited the Russian 102nd military base in Gyumri. According to the statement by the Ministry’s press office, Harutyunyan emphasized the role of the Russian base in ensuring stability in the region.

Second time in December the Director of the Armenian National Security Service Armen Abazyan is visiting Moscow. No further details about the agenda of the visit were provided by the Service.