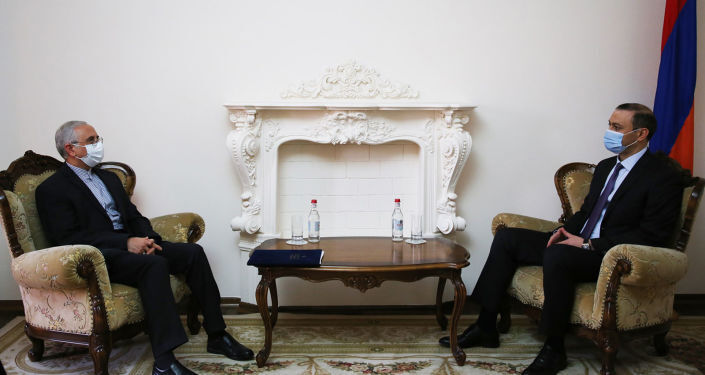 “The Artsakh Defense Army is strictly adhering to the ceasefire”, Ministry of Defence

“The Artsakh Defense Army is strictly adhering to the ceasefire, no unit has taken part in any action in the given section, moreover, no emergency incident relating to the Artsakh Defense Army units was recorded,” the statement by Armenian Ministry of Defence reads following the reports circulated by Azerbaijani media on the alleged resumption of fighting between the Armenian and Azerbaijani military near the village of Togh in the Hadrut region. The ministry reminded that the village is under the complete control of the Azerbaijani Armed Forces following the Moscow-brokered peace statement signed by Armenia, Azerbaijan and Russia.

Nevertheless, the Ministry did not preclude the possibility of a provocative information campaign orchestrated by Azerbaijan, Artsakhpress.am reports.

Later the Artsakh State Service of Emergency reported that Azerbaijani forces prohibited a rescue team from Artsakh to enter the Hadrut region and conduct search and rescue operations.

Citizens held protests demanding Armenian PM Nikol Pashinyan’s resignation in front of the National Assembly in Armenia as an extraordinary session of the Armenian Parliament was taking place today. The protests were held under the slogan "Armenia without Nikol." The Police informed about clashes between the protesters and two MPs and told that 15 protesters have been detained in consequence.

A number of issues, including amendments to the constitutional Law on Political Parties were on the agenda. During the sitting, Prosperous Armenia Party MP Naira Zohrabyan called PM a traitor “who is handing over parts of [Armenian] homeland” to Azerbaijan based on verbal agreements that were not set down in the Russia-brokered trilateral ceasefire statement. Earlier, the ruling “My Step” parliamentary group had undertaken an initiative to dismiss MP Naira Zohrabyan from her post of the Parliamentary Committee on Protection of Human Rights and Public Affairs. The Prosperous Armenia Party called the initiative “anti-constitutional”, Press Service of the National Assembly informs.

“Demands for the resignation of Armenian Prime Minister Nikol Pashinyan have lost all meaning,” the ruling party MP Lilit Makunts said at the extraordinary sitting on December 28. According to her, everyone who wants a change of power should negotiate on when and how the early parliamentary elections should be held as the only legal way of power shift, Arminfo.am reports.

During an interview with the Armenian Public TV on Sunday, PM Pashinyan stated that despite substantial media, financial, and organizational resources, the opposition has been unable to secure public support over the demands of PM’s resignation.  “Let us not think of a coup d’état and internal conflict scenarios but give the people an opportunity to resolve this situation instead,” Pashinyan said.

“Homeland Salvation Movement”, a coalition of more than a dozen opposition parties demanding PM Nikol Pashinyan’s resignation, made a statement about Pashinyan’s call on starting discussions with political forces about snap parliamentary elections. “The Prime Minister’s willingness to quickly organize these snap parliamentary elections stems exclusively from the ongoing mass protests, generated by the Homeland Salvation Movement. A Prime Minister, which led to the unprecedented social split, has no moral and political legitimacy and is unable to ensure free electoral process,” the Movement’s statement reads.

Opposition MP Edmon Marukyan also commented today on Pashinyan’s urge to hold snap elections. According to him, the events everyone is witnessing show that the PM’s ruling “My Step” party is incapacitated to organize snap elections and secure the safety of those – including the ruling party itself – who will go out to campaign. Marukyan also informed that he visited Syunik, the Armenian southeastern region where border issues with Azerbaijan emerged after the recent Nagorno Karabakh peace deal. He reminded that PM Pashinyan was unable to visit Syunik where protesters blocked the highways demanding the PM’s resignation following border demarcations dangerously exposing Armenian civilian settlements to the Azerbaijani military.

“Azerbaijanis have given one hour to leave the premises of 12 buildings and structures located in the premises of a gardening company in the Armenian city of Goris,” Irina Yolyan, Deputy Mayor of Goris, a town in Syunik region bordering with Azerbaijan, told News.am. She added that the families living there asked for three hours to be able to leave their homes but were rejected by the Azerbaijani forces. “The people say they have all the documents stating that the buildings are on within the state boundary,” Yolyan said. “We claim that these are our lands and have never been a part of Azerbaijan,” Yolyan added. Meanwhile, the Deputy Mayor of Goris raised the issue of the strength of Armenian borders posting a picture on Facebook depicting a sign saying, “Welcome to Azerbaijan!”. She wrote that the sign has been put up on a highway leading from Goris to Kapan, towns in the Armenian Syunik region.

FMs of Armenia and Iran Ara Aivazyan and Mohammad Javad Zarif had a telephone conversation on December 28. The sides discussed the issues of “bilateral cooperation and regional agenda,” the Armenian Ministry of Foreign Affairs told Armenpress.am. Minister Zarif extended condolences over the losses of the Armenian side during the Artsakh War and expressed solidarity with the people of Armenia. “The interlocutors underscored the importance of further boosting mutual contacts and dialogue in various levels based on the centuries-old friendship between the two peoples. Mutual readiness for deepening close partnership in bilateral and multilateral formats was reaffirmed,” Armenpress.am reports.

Armenian Security Council Secretary Armen Grigoryan accepted Iranian Ambassador to Armenia Abbas Badakhshan Zohouri on December 28. The sides discussed regional security challenges and highlighted the importance of stronger cooperation in the area of regional strategic infrastructure. During the meeting, the sides emphasized the special role of the North-South highway in the development of Armenian-Iranian trade and economic relations.