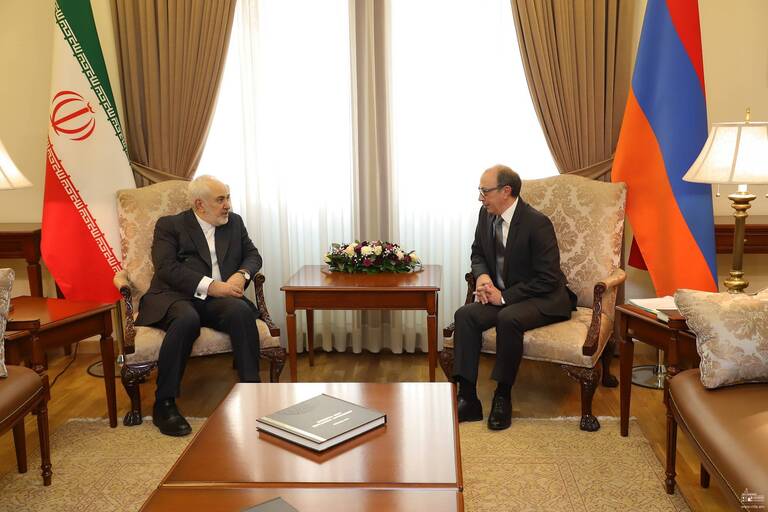 ‘Armenia does not consider that the results of Azerbaijan’s aggression against Artsakh and the use of force can create a basis for lasting peace or be considered an opportunity for regional cooperation,’ said Armenian Foreign Minister Ara Ayvazyan during his meeting with Mohammad Javad Zarif, the Foreign Minister of Iran who arrived in Armenia following his visits to Moscow and Baku.

The Iranian FM expressed condolences over the human losses in the 2020 Nagorno Karabakh war, and expressed readiness to assist in solving humanitarian issues, Armenpress.am reports. ‘As two ancient civilizations, we have had many ups and downs, but we have always overcome them with honor,’ Mohammad Javad Zarif said.

Ministers Aivazian and Zarif exchanged views in detail on the regional security and stability. Both sides expressed concern over the deployment of foreign terrorist fighters in the region.

Speaking about the possibility of a railway connecting Armenia to Iran through Azerbaijan’s exclave Nakhijevan, Minister Zarif told RFE/RL’s Armenian Service that the railway is a regional necessity, ‘an ancient road that links the North to the South’ and that Iran is working on that direction with Armenia, Azerbaijan, and Russia.

Later, Mohammad Javad Zarif was received by Armenian PM Nikol Pashinyan, who highlighted deepening and developing bilateral relations between countries among many issues of discussion, Armenpress.am reports. Armenian PM noted that the relations between Armenia and Iran are based on traditional friendship. ‘I think that the stability, peace, and sustainable development of the region are among our common interests,’ Pashinyan said.

For his part, the Iranian FM said that Iran has common regional concerns with Armenia. ‘From the very first days of the conflict we have been in constant touch both with you and other countries of the region and want to keep that tie having cooperation prospects,’ the Iranian FM added.

Russian President urged the international community, particularly the countries that participated in the solution of the crisis, ‘to provide assistance to the affected regions for the solution of the humanitarian issues related to the return of the refugees, reconstruction of ruined buildings, protection, and restoration of historical, religious and cultural monuments.’