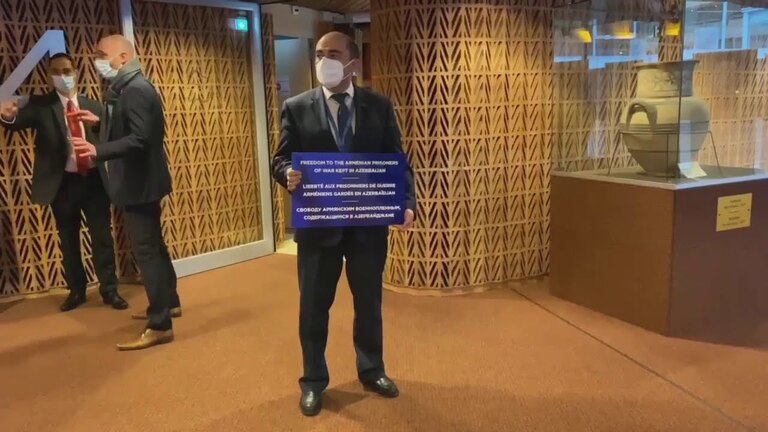 Parliamentary Assembly of the Council of Europe’s (PACE) session started with an act of protest by the head of ‘Bright Armenia’ parliamentary party Edmon Marukyan who held a poster saying, ‘Freedom to the Armenian prisoners of war kept in Azerbaijan.’

Marukyan published a video of the protest captioned: ‘We started the PACE session by raising our voice in protest and demanding to exert international pressure on Azerbaijan to release the Armenian prisoners of war and civilians as soon as possible.’

Since the Moscow-brokered truce statement, which ended the recent Nagorno Karabakh war on November 9, 2020, Azerbaijan refuses to return Armenian PoWs as set by the trilateral truce statement and hides the real number of captured servicemen and civilians.

Human rights advocate Siranush Sahakyan, who represents the interests of the Armenian POWs in the ECHR, told Armenpress.am that the European Court of Human Rights (ECHtR) gave a priority to the investigation of cases relating to the Armenian PoWs who are currently in Azerbaijan, to investigate the cases within a shorter period of time.

Sahakyan commented on the status of 62 Armenian servicemen who were captured by Azerbaijani forces after the war in the Hadrut region, saying that Azerbaijan will try to prolong the process of their return. In the lawyer’s words, considering that there is a state-level anti-Armenian policy, containing hatred, the Armenian side can directly seek international judicial protection.

Additional evidence of deeply rooted hatred and enmity toward Armenians in Azerbaijan was presented on Monday by the Armenian Human Rights Defender Arman Tatoyan. The Ombudsman published a list of posts spreading Armenophobia by real users of Azerbaijani social media copying the statements by Azerbaijani authorities and cultural figures. The posts contain hatred expressed in calls on torturing and killing Armenian women and children, slogans such as ‘The best Armenian is a dead Armenian’ and citing Azerbaijani President Ilham Aliyev’s statement about ‘driving away Armenians like dogs’. ‘The same words are used by the Azerbaijani military in videos of torture and inhumane treatment of Armenians,’ the Ombudsman said.

Earlier Human Rights Defenders of Armenia and Artsakh published a special report with the results of the monitoring carried out during the September-November war.

The head of the ruling My Step parliamentary group Lilit Makunts has confirmed in her interview with RFE/RL Armenian Service that her possible appointment as Armenian Ambassador to the United States is under discussion.

Makunts, 37, a former English teacher, started her political career after the Revolution in Armenia in 2018 when she was appointed as Armenia’s Minister of Culture.

Naira Zohrabyan of the opposition ‘Prosperous Armenia’ party called the possible decision a ‘disaster’ saying that knowledge of English is not enough to work as a professional diplomat. ‘A woman who only speaks English will be appointed ambassador in one of the most important countries, which co-chairs OSCE Minsk group,’ the opposition MP said.

‘With the stakes so high and the need for serious, seasoned professionals so very clear, we cannot afford on-the-job-training, political sinecures, or anything other than our very best in high-level diplomatic postings,’ Armenian National Committee of America reacted as RFE/RL Armenian Service reports.

The ruling party lawmaker responded to the critics by saying that while the experience is extremely important, in some cases it does not play a priority role. According to her, there is no limitation for a political appointment of an ambassador as an alternative to a diplomatic appointment.

Armenian Foreign Minister Ara Ayvazian had a telephone conversation with UNESCO Director-General Audrey Azoulay. The sides discussed the issues of preservation of the Armenian historical and religious heritage and the cooperation between Armenia and UNESCO within that context.

Minister Ayvazyan noted that the Armenian historical and cultural monuments are an integral part of the rich heritage of the region adding that UNESCO’s active involvement in their protection is expected.

Ara Ayvazyan stressed the urgent need to take measures for the protection of Armenian historical and cultural heritage which have passed under the control of Azerbaijan, considering the deliberate destruction and misappropriation of the Armenian heritage.

Welcoming the decision of UNESCO to send a fact-finding mission, the Minister stressed the universal importance of the cultural heritage of Artsakh, considering unacceptable the politicization of its protection and creation of artificial obstacles by Azerbaijan.