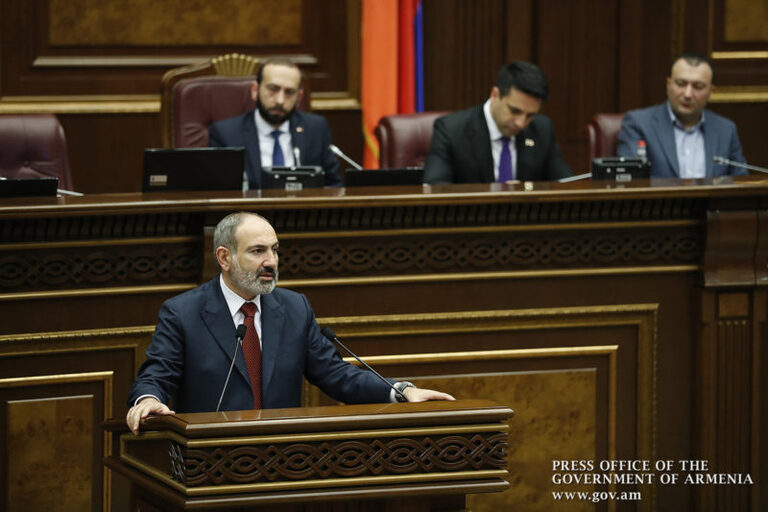 The daily summary for January 19 is available here.

There is a very clear formula: power belongs to the people - Pashinyan

‘There is a very clear formula: power belongs to the people and the decisions about power should be made by the people,’ Armenian PM Nikol Pashinyan said during a Q&A session in the Parliament in a response to opposition ‘Prosperous Armenia’ MP’s question whether Pashinyan was going step down.

In Pashinyan’s words, he will not take any step that may deprive the people of the leverage of selecting their authorities and transform this right into a closed-door discussion.

In response to a comment that the government has exhausted itself, Pashinyan suggested deciding on the timeframe of snap elections arguing that a PM cannot be elected twice without a snap election.

The extra-parliamentary coalition of a dozen parties demanding Pashinyan’s resignation, propose to create an interim government. They nominated Vazgen Manukyan as an interim Prime Minister.

‘Publication of the famous postal stamp is unacceptable,’ said Pashinyan during a Q&A session in the Parliament speaking about a stamp issued by the Azerbaijani government depicting a person with medical gear disinfecting Armenians from Nagorno Karabakh. According to Pashinyan, the stamp is a manifestation of fascism by Azerbaijan, since a similar stamp was issued in Nazi Germany. Pashinyan noted that his government’s task is to manage the situation of post-war aftershock.

Speaking about the post-war situation, Foreign Minister Ara Ayvazyan criticized Azerbaijani President Ilham Aliev’s controversial statements about the conflict being over while making new provocative statements. ‘This proves that the conflict has entered a new phase and it is necessary to shape a common agenda of the Armenian parties,’ the Minister said highlighting the importance of his recent official visit to Nagorno Karabakh. He said that the Armenian side is ready to restart negotiations within the format of OSCE Minsk Group Co-Chairmanship on the basic principles that were agreed upon before.

The Minister also responded to ‘My Step’ MP Narek Mkrtchyan’s comment that while Armenia is a member of the International Religious Freedom Alliance, the organisation did not make any statements about attacks and destruction of Armenian religious heritage in Nagorno Karabakh. In Ayvazyan’s words, Armenia will make pragmatic decisions based on Armenian national interest. ‘We are seriously analysing the attitude of different institutions, countries, and regions to make necessary corrections,’ FM Ayvazyan said.

According to the Foreign Minister, the safe return of the Armenian population to their homes, provision of humanitarian assistance to the people in Artsakh, and protection of Armenian religious and cultural heritage are the priority issues for Armenia.

Minister Ayvazyan also touched upon Aliyev’s statement that Shushi will become a Turkic cultural center. ‘Shushi is an Armenian cultural center,’ Ayvazyan argued expressing confidence that Armenia will receive the international community’s support on this issue.

Deputy Prime Minister Mher Grigoryan said during a Q&A session in the Parliament that there is no agenda in relation to the unblocking of regional transport connections as set by the recent Nagorno Karabakh truce statement.

Earlier, Russian ‘Kommersant’ published a map depicting a railway corridor passing through the Armenian southern territory and connecting Azerbaijan to its exclave Nakhijevan. Grigoryan assured that there were no discussions about a railway map neither in written nor in verbal forms. He also mentioned that while the 9th provision about unblocking regional transport communication is being presented as beneficial to both sides, it does not correspond to the reality.