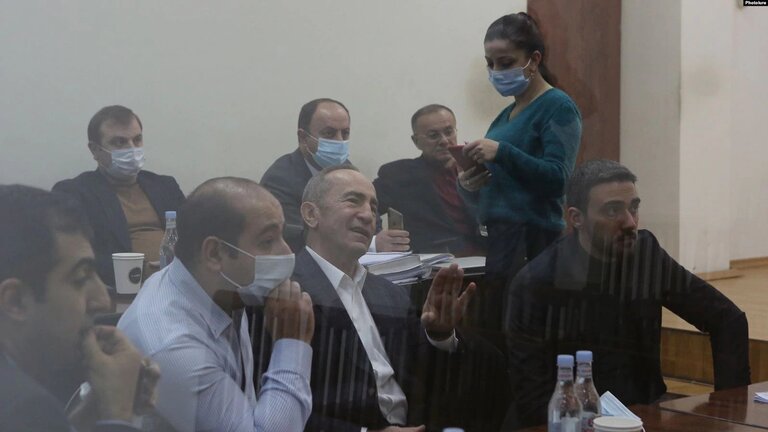 ‘All of us and the public administration system, in general, as the entity responsible for the situation in the country, have gone through difficult times,’ Armenian PM Nikol Pashinyan said when introducing newly appointed Chief of the Office Arsen Torosyan to its members, PM’s office reports.

Armenia’s ex-President Robert Kocharyan, who was in power from 1998 to 2008, appeared in a Yerevan Court on Monday to attend another hearing over an alleged criminal case on ‘overthrowing the constitutional order’.

Kocharyan’s defence filed a motion for recusal of the Prosecutors arguing that they are under the influence of the government, since PM Pashinyan can invite the Prosecutors any time and discuss the process of criminal cases which is against the legal norms, Sputnik Armenia reports.

As Panorama.am reports, dozens of citizens gathered outside the court building for a protest with posters, reading ‘Authorities who sold Shushi versus Heroes who liberated Shushi’.

In 2008 when Kocharyan’s ally Serzh Sargsyan was elected the next president, massive public protests started disputing the results of the elections. Eight protesters and two police officers were killed as a result of clashes and violent actions by the police. According to Armenia’s Special Investigation Service, Kocharyan and his team used military units against protesters. Nikol Pashinyan, who was one of the organisers of the protesters and Armenia’s 1st president Levon Ter-Petrosyan’s ally in 2008, was arrested and spent two years in prison.

Kocharyan, who left politics in 2008 and immersed into business in Moscow, where he has an extensive network, was detained in 2018 in Yerevan. Kocharyan denied the accusations calling them an act of political revenge. He was released in 2020 on more than a $4M bail which, according to his lawyers, is ‘unprecedented’ in Armenia.

Seyran Ohanyan, Chief of the General Staff of the Armed Forces in 2008, general Yuri Khachaturov, a former CSTO secretary-general who served as Deputy Minister of Defense in 2008, and former Secretary of the Security Council Armen Gevorgyan were also charged over the same criminal case.