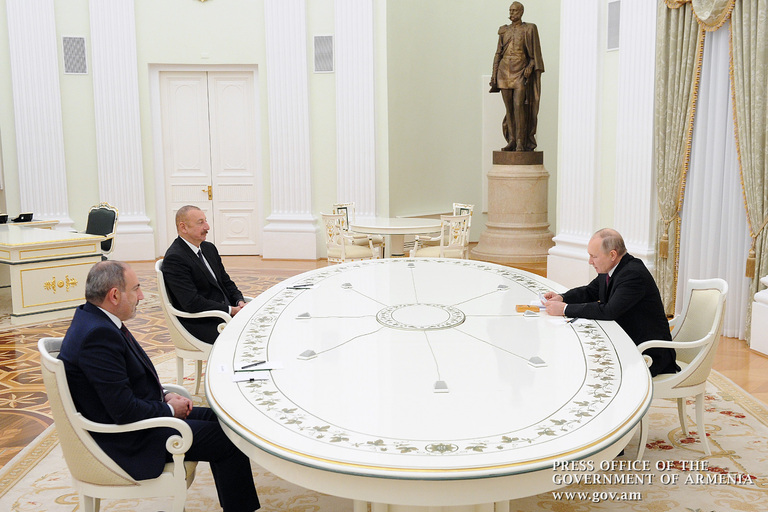 Russian President Vladimir Putin, Armenian PM Nikol Pashinyan, and Azerbaijani President Ilham Aliyev signed a joint statement as a conclusion of a 4-hour meeting in Moscow on Monday. The leaders met for the first time since the Moscow-brokered truce deal ended the recent Nagorno Karabakh war.

The Statement specifies the lifting of the blockade of all economic and transport links in the region, Russian Ria Novosti news agency reports. A tripartite Working Group under the joint chairmanship of the Deputy Prime Ministers of Armenia, Russia, and Azerbaijan will be set up to submit a roadmap of implementation of regional transport infrastructures and economic development prioritising settlement of railway and road communications.

The transport and economic links in the region were disrupted at the beginning of the 90s when Azerbaijan and its ally Turkey have closed their borders with Armenia since the Nagorno Karabakh conflict emerged.

Following the discussions, Russian President Putin said that the meeting was exceptionally important and productive. He specified the need for security of the transport infrastructures through the territory of Armenia and Azerbaijan. He expressed confidence that both the Armenian and Azerbaijani people, as well as the region and Russia, will benefit from the implementation of the statements.

Armenian PM Pashinyan agreed that the statement is very important adding that ‘the implementation of these agreements can simply change the economic situation in our region. Economic innovations can lead to more reliable guarantees of regional security.’

According to Azerbaijani President Aliyev, unblocking of transport links ‘can give great dynamism to the development of the region, as well as strengthen security, because the opening of transport communications is in the interests of Azerbaijan, Armenia, and Russia.’

‘Unfortunately, today we couldn’t reach a final agreement on the exchange of prisoners of war. We have agreed to continue working on that,’ Armenian PM Pashinyan told the press following the trilateral meeting with Armenia, Azerbaijani, and Russian leaders in Moscow. Pashinyan added that Armenia is ready for constructive work in economic direction, however, it is impossible to solve all the issues with one meeting. ‘The most important for us are the humanitarian issues, the exchange of POWs, which is enshrined in the trilateral statement,’ Pashinyan added.

Armenian PM stated that one of the many issues that need to be resolved is the status of Nagorno-Karabakh. ‘Armenia is ready to continue negotiations within the framework of the OSCE Minsk Group,’ he said.

According to Russian President Putin, there are prerequisites for a long-term settlement of the Nagorno-Karabakh conflict which is in the interests of both Armenian and Azerbaijani peoples. He emphasized his satisfaction with ensuring the ceasefire and specified the role of the 2000 Russian peacekeeping troops deployed in Nagorno Karabakh after the November 9 truce statement.

Anti-Pashinyan protesters gathered near Zvartnots International Airport of Yerevan to prevent Armenian Prime Minister Nikol Pashinyan from traveling to Moscow to take part in the trilateral meeting with Russian and Azerbaijani leaders, News.am reports.  The protesters wanted to march to the airport, but the police had blocked the road. Earlier, opposition channels reported that Armenian PM Pashinyan planned to sign a secret document in Moscow ‘to transfer Armenia’s sovereign territories to Azerbaijan’, providing a corridor through Armenian territory linking Azerbaijan and its exclave Nakhijevan through Armenia’s territory and to withdraw troops from Nagorno Karabakh.

President of Armenia Armen Sarkissian has published an article “on the inevitability of building a substantive state”, the Presidential Office told Armenpress news agency.

‘Today, we (and first and foremost, the government that has taken responsibility for its own citizens and Armenians of the world) must acknowledge the existence of a deep political, economic, social and psychological crisis. Citizens have every moral right to demand concrete, timely and meaningful answers on the ways-out of the crisis from the members of the National Assembly elected by them, the government and prime minister,’ the President writes.

According to President Sargsyan, to avoid the ‘catastrophic consequence’ of the division of the society a government of national accord must be formed with the help of the institute of the president and amendments should be made to the Electoral Code and Constitution within one year.

The President identified three goals for the Government. He mentioned the elimination of the consequences of the war, such as the return of all hostages, accommodation for those left homeless, and proper treatment of those injured during the war. ‘Secondly, the creation and implementation of a roadmap to bring the country out of the political and economic crisis. Thirdly, the reform of the normative and legal framework, providing the necessary conditions for the early elections in reasonable terms,’ the article reads.