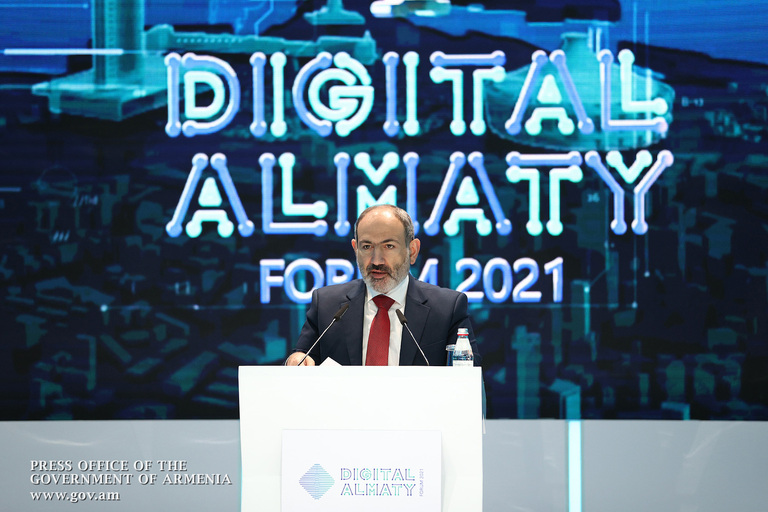 On the margins of his working visit to Kazakhstan, Prime Minister of Armenia Nikol Pashinyan today attended the Almaty Digital Forum 2021, Armenpress.am reports.

The Forum was attended by the prime ministers of the member states of the Eurasian Economic Union (EAEU), Eurasian Economic Commission Board, CIS Executive Committee representatives, and international experts.

‘I am sure that today’s forum will have an important contribution in identifying the priority directions and efficient toolbox for cooperation in the high tech and digital technology sector between our countries,’ Pashinyan said at the Forum.

Pashinyan also noted that the EAEU countries were able to use digital technologies in overcoming some of the problems caused by the pandemic. He particularly emphasized the ‘Traveling without Covid-19’ mobile application, which kicked off on February 1, and restored the free movement of citizens between Armenia, Russia, and Belarus.

‘We should strive to achieve full-fledged and all-encompassing digitalization of services provided to citizens by the state. To this end, we need to use the entire range of electronic services - mobile phones, network services, cloud technologies, and so on,’ Pashinyan said.

According to Pashinyan, opportunities opened up through digitization can be used to increase the efficiency of the free labor movement and one mobile application can serve as a one-stop-shop with ‘all information on available jobs throughout the EAEU, enabling people to fill out and submit the necessary documents to get the job of our choice.’

‘We should strive to ensure that the borders between the EAEU states disappear at the digital level and that existing restrictions are minimized,’ Pashinyan said.

Russian Prime Minister Mikhail Mishustin, in turn, expressed gratitude to the Deputy Chairman of the Eurasian Development Bank’s Management Board Tigran Sargsyan for the creation of the “Travel Without COVID-19” application that is used in restarting travel following the pandemic-related shutdown, Armenpress.am reports.

In the frames of the Forum, Armenian PM Pashinyan met with the new Prime Minister of Kyrgyzstan Ulukbek Maripov. Noting the close cooperation between the two countries, Pashinyan added that Armenia is interested in deepening the partnering ties. For his part, the Kyrgyz PM noted traditional warm relations between the countries, adding that works must be done to deepen both the commercial and the cultural-humanitarian cooperation.

As Armenpress.am was informed from the office of Tigran Avinyan, greeting the guest, Avinyan noted that Armenian-Iranian relations are unique for their centuries-old friendship, based on mutual trust and respect. The sides shared the opinion that the Armenian-Iranian partnership has great potential, which should be brought to life step by step.

Assessing peace, stability, and sustainable development as a common interest for Armenia and Iran, Tigran Avinyan referred to the regional situation resulted from the Azerbaijani aggression against Artsakh. The Deputy PM particularly focused on the issue of the exchange of detainees, which is a priority for Armenia.

Issues related to the ‘Persian Gulf-Black Sea' international transport corridor were also discussed at the meeting.