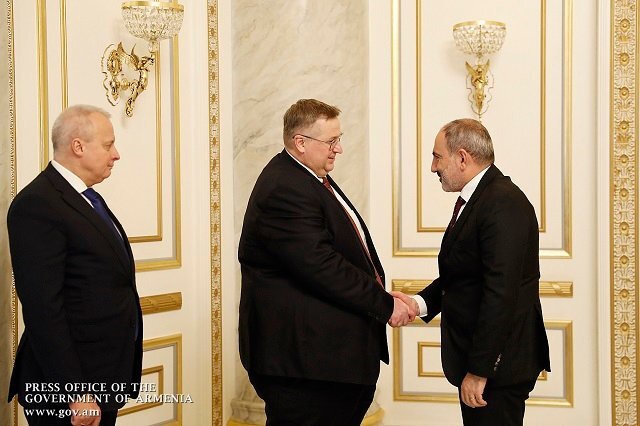 On his part, Overchuk reaffirmed Russia’s support to the ‘friendly Armenian people’ in this difficult time adding that Moscow is ready to continue the programs aimed at deepening the Armenian-Russian strategic partnership.

Pashinyan and Overchuk discussed the situation in Nagorno Karabakh, the humanitarian assistance that has been provided, the exchange of POWs and bodies of killed soldiers, and other issues on the agenda of Armenia-Russia relations.

According to the Trade Promotion Organization of Iran, Armenia is willing to import over 2,000 items from Iran after announcing bans on imports from Turkey, Tasnim News Agency reports.

Iranian Trade Promotion Organization described this as an opportunity for Iranian companies, considering that Armenia’s minister of economy is going to visit Tehran within the next few weeks.

The Armenian government approved a decision to ban goods imported from Turkey as a consequence of the recent war unleashed by Azerbaijan and overtly supported by Turkey. The ban was also aimed at preventing the penetration of potential dangers through the import of goods from a hostile country, as the Armenian government explained.

Human Rights Defender of Armenia Arman Tatoyan responded to Azerbaijani President Ilham Aliyev’s statement over calling the Armenians, who are in the Azerbaijani captivity, terrorists.  According to Tatoyan, Aliev’s statements are in “gross violation of the post-war humanitarian process and the international human rights protection standards.”

Tatoyan reminded about intentionally published videos of torture and inhuman treatment of the Armenian POWs by Azerbaijani forces. “The studies and reports of the Office of the Human Rights Defender of Armenia confirm that the aim of all these is to cause mental suffering to the families of the prisoners of war, to play with emotions of the Armenian society and generate tension in Armenia,” Tatoyan added.

“The Armenian servicemen captured by Azerbaijani soldiers should be immediately released and returned to Armenia,” Tatoyan said calling on international bodies with human rights protection mandate to exclude any violation of the humanitarian process and ensure strict compliance of the process with international human rights standards.

The situation in Syunik started escalating recently after the Armenian Defense Ministry was reported to order handing over the Armenian advantageous positions to Azerbaijan dangerously exposing Armenian border communities to the Azerbaijani forces due to their close distance.  Later the Minister of Defence announced that the security of Armenian southeastern borders will be guaranteed by Russian troops.

As a consequence of the recent Nagorno Karabakh war, the southeastern Armenian region has been going through demarcations and delimitations processes which, according to the Armenian Human Rights Defender Arman Tatoyan, endanger or violate the rights of people in border communities, their physical and psychological integrity, and property rights. “According to international requirements, when defining state borders, priority should be given to the rights of citizens of border settlements, their real estate and other property, issues of cadastral information of border settlements, and so on,” said Tatoyan on Thursday.

“The presence of Russian peacekeepers provides strong security guarantees for our compatriots in Artsakh,” Prime Minister Nikol Pashinyan stated in his New Year address to Armenians, adding that the status of Artsakh continues to be an absolute priority.

“We should further strengthen the relations with our primary security partner – Russia, and create new security guarantees in this context,” Pashinyan added after speaking about the importance of building a new security environment.

Following the Moscow-brokered peace statement over the recent Nagorno-Karabakh war, Russian peacekeepers were deployed in Artsakh and the Armenian southeastern Syunik region, bordering with Artsakh.

47,000 Refugees Have Returned to Nagorno Karabakh

Russian peacekeepers have escorted another row of vehicles transporting 220 refugees returning to Nagorno-Karabakh from the territory of the Republic of Armenia, News.am reports referring to Russian Ministry of Defense reported.

During the recent Nagorno-Karabakh war, the majority of 150.000 inhabitants fled to Armenia as a consequence of the heavy bombardment of civilian settlements by the Azerbaijani military. According to Nagorno-Karabakh officials, 50 civilians have been killed.