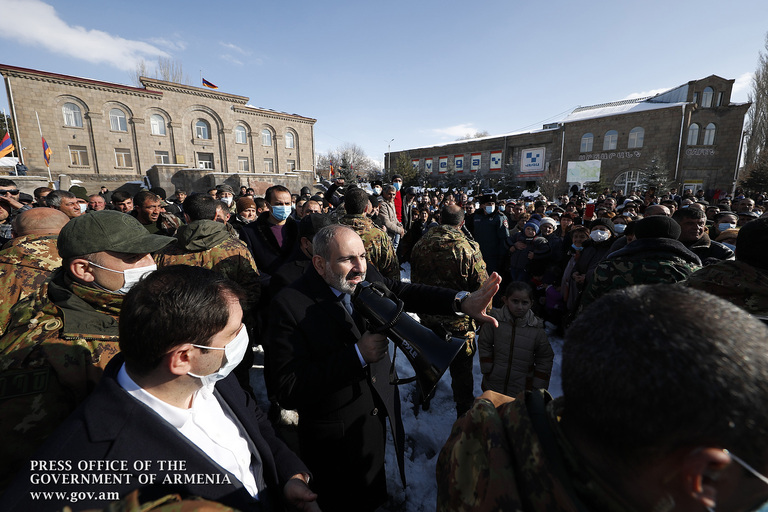 Last week, the residents blocked the Goris-Kapan highway in the Syunik region following the news that the Armenian Ministry of Defence ordered the serviceman to leave the advantageous Armenian positions. According to the residents, this geography – which was not set by the trilateral statement signed by Armenia, Azerbaijan, and Russian – will dangerously expose Armenian border communities to the Azerbaijani forces due to their close distance. Later Armenian Defence Minister Vagahrshak Harutyunyan announced that the security of Armenian southeastern borders will be guaranteed by Russian troops.

Pashinyan’s visit was limited to the communities not affected by the new border demarcations. Prime Minister’s supporters gathered there to discuss the issues having emerged after the war. Later, in Saint Gregory Church in Sisian, the local priest refused to shake Pashinyan’s hand causing the Prime Minister’s supporters to march towards the church demanding the priest to leave. Pashinyan explained cutting short his trip by his decision not to use force amid mourning for fallen soldiers.

Six Armenian soldiers were found as a result of search operations in the territories that came under the control of Azerbaijan, President of Artsakh Arayik Harutyunyan announced yesterday. Harutyunayn expressed his gratitude to the Russian contingent of the peacekeeping mission in Artsakh, the International Committee of the Red Cross as well as Ministry of Emergency Situations in Artsakh and Ministry of Defence of Armenia.

Armenian Defense Minister Vagharshak Harutyunyan said today that the Armenian side has provided the International Committee of the Red Cross with information about 62 servicemen taken captive by the Azerbaijani troops in Nagorno-Karabakh's Hadrut region, Panarmenian.net reports. The servicemen were captured following new offenses by Azerbaijani forces in two villages in Nagorno Karabakh after Armenia, Azerbaijan, Russia trilateral peace statement.

Meanwhile, according to Artsakh Emergency Situations Service, bodies of another 19 Armenian Servicemen have been recovered in Nagorno-Karabakh. As of yesterday, a total of 1039 bodies of Armenian servicemen and a few civilians were found, the Service reported. The Armenian side reports about over 3300 total deaths. Azerbaijan published a list of 2723 killed military personal on its side by early December. The Syrian Observatory for Human Rights estimates the number of killed Turkish Syrian mercenaries, who fought for Azerbaijan, at 514.

Russian Officials About the Situation in Nagorno Karabakh

“The presence of militants from the Middle East in hostilities in the Nagorno-Karabakh region is a confirmed fact by many. The number of mercenaries reached about two thousand,” Russian Deputy Minister of Foreign Affairs Oleg Syromolotov said to Ria Novosti. The Deputy Minister reminded of the concerns by Russia over the radical jihadist mercenaries in Azerbaijan. “Our position regarding them has not changed - they should not be there,” said Syromolotov.

Participation of Turkey-recruited Syrian mercenaries who were fighting for the Azerbaijani military against Nagorno Karabakh has been proven, including the evidence of captured mercenaries by Armenia facing charges for international terrorism.

Russian President Vladimir Putin considers the Russian peacekeepers who are currently deployed in Nagorno Karabakh as a security guarantor, Armenpress reports referring to RIA. “They are endangering their lives in order to return the peaceful life there”, Putin said. Today Russian Defence Minister Sergey Shoygu informed that two modular camps have been built in Stepanakert for 330 Russian peacekeepers. 32 new camps are envisaged to be built by April 2021, RFE/RL reported.

President Sarkissian and His Holiness Karekin II, Catholicos of All Armenians visited Yerablur Military Cemetery yesterday to pay tribute to the fallen servicemen of the Nagorno-Karabakh war.

Human Rights Defender of Armenia Arman Tatoyan presented maps used by Azerbaijan’s military that depicts Armenia as “historical Azerbaijani lands,” Armradio.am reports. According to the Ombudsman, these maps are accompanied by texts clearly not corresponding to reality and are based on the theses anti-Armenianism and hostility propaganda organized by the Azerbaijani authorities. The Ombudsman’s investigation suggests that these are among the main reasons why the Azerbaijani Forces continue to commit war crimes and atrocities (beheadings, shootings, torture, etc.) against Armenians in April 2016, September-November 2020, and other periods. These findings, accompanied by a corresponding analysis, will be sent to the respective international institutions.

Online kick-off meeting of a two-year EU Twinning project aimed at improving the capacity of the Armenian National Assembly was held today. The project will be implemented by the Greek and Italian parliaments.